Skip to content
JASNA-NJ Uncategorized November 12, 2012 2 Minutes
Hello all, I would like to tell you a story.  This story is about a group of women, all members of the CNJ region of JASNA.  They gathered together one Sunday afternoon for brunch and would then proceed to go see a play on Broadway.
They gathered for brunch at a restaurant called Lillies’ Time Square. 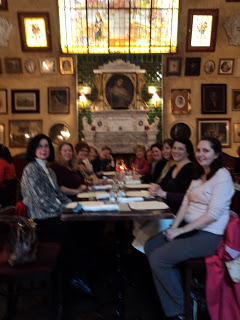 While they were getting settled and catching up with each other a few members noticed a few gentlemen entered and were seated next to them.  One member noted that they were attractive.  Otherwise the were not really noticed.  Shortly after their arrival whispers started to move down the table, one of the men was Dan Stevens.
Their fearless leader snapped a picture before going over to introduce the group.

She apologized for disrupting them but she wanted to let him know that they were members of CNJ JASNA and were up there to see him in The Heiress.  She told him that they all loved him in Downton Abbey (she forgot about Sense and Sensibility, it’s not her favorite production of the story).  She just wanted to let him know that was the reason a whole table full of women might be looking at his table and giggling.
As he was leaving the restaurant he thanked the ladies and hoped they would enjoy the show.  As he walked out of the restaurant all the ladies pretty much sighed and watched him walk out.
After their meal they made their way to the Walter Kerr Theater to see The Heiress. 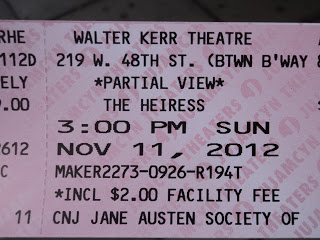 The Heiress is a play based on the novel Washington Square by Henry James. The play stars Jessica Chastain as Catherine Sloper (the heiress), David Strathairn as Dr. Sloper (her father), and Dan Stevens as Morris Townsend (the suitor).

THE HEIRESS is the story of Catherine Sloper, the shy and sheltered daughter of a prominent New Yorker. Caught between the demands of an emotionally distant father and the attentions of a passionate young suitor, Catherine must navigate the terrain of love and regret, desire and duty, a chance for happiness and the burden of fortune…as only an heiress can. – from the official website

Washington Square “is often compared to Jane Austen’s work for the clarity and grace of its prose and its intense focus on family relationships. James was hardly a great admirer of Jane Austen, so he might not have regarded the comparison as flattering. In fact, James was not a great fan of Washington Square itself” (from the Wikipedia article on the novel).

For all pictures from the trip please see our Facebook Page.