This is a meme hosted by Book Journey.

I’ve been on a kick of reading graphic novels on my lunch breaks recently.  Next up for me (starting today at lunch) is a Manga version of Pride and Prejudice.

Manga are comics created in Japan conforming to a style developed in Japan in the late 19th century. In Japan, people of all ages read manga. The medium includes works in a broad range of genres. Manga stories are typically printed in black and white. The term manga is a Japanese word referring both to comics and cartooning. “Manga” as a term used outside Japan refers specifically to comics originally published in Japan.

Manga is read in reverse order of how we read books as you can see in the pictures below: 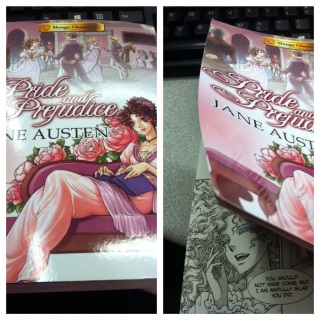 If you would like to read more about manga, you can view the wikipedia entry or this great article at wiseGeek.
OK So now on to the book itself. So I like the art and it’s a good size book so I’m looking forward to seeing what they’ve kept as text and what was translated into the art work. From the size of the book it looks like they may have kept a good part of the text. This is clearly bigger than some of the other graphic novel adaptations I’ve seen.  I think this is in part to the fact that in our culture (sadly) we think only young people read this format and therefore we need to make it short. As mentioned above manga is read by all and they can include a lot more of the original story into the format.
Happy Monday!