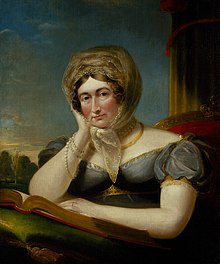 I’m going to do this one a bit different. In reading these articles I couldn’t help but notice that there was a lot of snark going on in most of them.  I’ll be sharing a quote from each article. The titles of each article is a link to the full length story.

Queen Caroline – Historic UK
Why the Prince of Wales, the son of King George III agreed to marry the fat, ugly and tactless Caroline of Brunswick is something of a mystery, except that he needed the money!

The Strange Marriage of the Prince Regent and Princess Caroline of Brunswick – Jane Austen’s World
This proposed union with his cousin went much against the Prince’s wishes, and when he met the 27-year-old German Princess in 1795, he turned to Lord Malmesbury and said, “Harris, I am not well. Pray, get me a glass of brandy.”

The Wedding of the Prince of Wales and Princess Caroline – Georgian Index
Though George IV wished to divorce his wife before his Coronation, he was not rid of her until her death at 53 on August 7, 1821 of an unknown gastric disorder. Speculation included everything from poison, to a tumor, to the mysterious illness of her uncle George III. The only child of the Prince and Princess of Wales, Princess Charlotte Augusta, was born on January 7, 1796, nine months after their wedding. The couple formally separated soon after. Princess Charlotte probably inherited porphyria, the disease which plagued George III, from her closely related parents. She preceded her parents in death during a difficult childbirth in 1817.

The Queen Caroline Affair, 1820 – A Web of English History
The “Delicate Investigation” did not provide the Prince of Wales with such damning evidence of his wife’s immorality that he could rid himself of her. The whole episode lowered him still further in public regard. To many it seemed monstrous that his wife should be arraigned for lapses which appeared less grave than his own. The Prince was mocked and lampooned, and he resented the attacks upon him. As his popularity waned, so Caroline’s increased. In 1814 the Whigs demanded that her allowance should be increased; on 30 June she was accorded an annual grant of £50,000 Her response was that she would be happy to accept £35,000 so as to ease the taxpayers’ burden. Then she she left for a period of residence abroad on the grounds that since the English Court would not give her the honours due to a Princess of Wales, she was content to be ‘Caroline, a happy merry soul’.

Tart of the Week: Princess Caroline – The Duchess of Devonshire
George sued her for adultery, a crime that could strip her of her title and head. It was at this trial that Caroline claimed she had committed adultery with only one man: George, her husband. She had a solid point too because he was technically married to Mrs. Fitzherbert, whom he never divorced. The jury saw her point too and George lost his case.

For more on Caroline of Brunswick you can find a number of resources at Royalty.nu