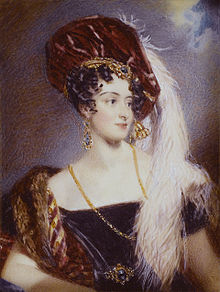 Sarah Sophia Child Villiers, Countess of Jersey (4 March 1785 – 26 January 1867), was an English noblewoman, a leading figure in Regency society, and one of the patronesses of Almack’s Assembly Rooms.

Through her marriage a member of the Villiers family. Lady Jersey married George Child Villiers, 5th Earl of Jersey. Her husband’s mother, Frances Villiers, Countess of Jersey (also Lady Jersey), was one of the more notorious mistresses of King George IV when he was Prince of Wales.

She was a Tory, although she lacked the passion for politics. She reportedly “moved heaven and earth” against the Reform Act 1832.

Lady Jersey was known by the nickname Silence; the nickname was ironic since, famously, she almost never stopped talking. She is a recurring character in the Regency novels of Georgette Heyer, where she is presented as eccentric and unpredictable, but highly intelligent and observant, and capable of kindness and generosity.Lady Jersey was immortalized as Zenobia in Disraeli’s novel Endymion. Caroline Lamb ridiculed her in Glenarvon: in revenge Lady Jersey had her barred from Almack’s, the ultimate social disgrace.