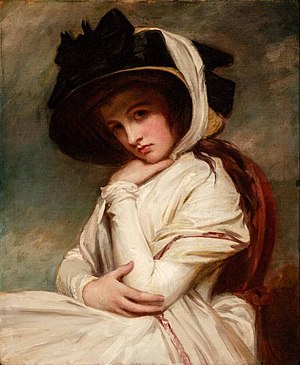 Emma, Lady Hamilton is best remembered as the mistress of Lord Nelson and as the muse of George Romney. She was born Amy Lyon in Ness near Neston, Cheshire, England, the daughter of Henry Lyon, a blacksmith who died when she was two months old. She was raised by her mother, the former Mary Kidd, at Hawarden, and received no formal education.

Still only fifteen years old, Emma met Sir Harry Fetherstonhaugh, who hired her for several months as hostess and entertainer at a lengthy stag party at Fetherstonhaugh’s Uppark country estate in the South Downs.Emma soon formed a friendship with one of the guests, the dull but sincere Honourable Charles Francis Greville, second son of the first Earl of Warwick and a member of Parliament for Warwick. It was about this time (late June-early July 1781) that she conceived a child by Fetherstonhaugh.

Soon thereafter, Emma gave up on Fetherstonhaugh, instead forming a romantic attachment to Greville. When the child (Emma Carew) was born, she was removed to be raised by a Mr. and Mrs Blackburn. As a young woman, Emma’s daughter saw her mother reasonably frequently, but later when Emma fell into debt, her daughter, Emma Carew, worked abroad as a companion or governess.

Emma was at Greville’s mercy and acceded to his request to change her name to “Emma Hart”. Greville kept Emma in a house at Edgeware Row, but he was in love with her and, wanting a painting of her, sent her to sit for his friend, the painter George Romney. It was then that Emma became the subject of many of Romney’s most famous portraits. George Romney was fascinated by her looks and ability to adapt to the ideals of the age. Romney and other artists painted her in many guises.

In 1783, Greville needed to find a rich wife to replenish his finances. Emma would be a problem his prospective wife would not accept him as a suitor if he lived openly with Emma Hart. To be rid of Emma, Greville persuaded his uncle, Sir William Hamilton, British Envoy to Naples, to take her off his hands. To promote his plan, Greville suggested to Sir William that Emma would make a very pleasing mistress, assuring him that, once married to Henrietta Middleton, he would come and fetch Emma back. Greville did not inform Emma of his plan, however, but instead suggested the trip as a prolonged holiday in Naples while he (Greville) was away in Scotland on business. Emma was thus sent to Naples, supposedly for six to eight months, little realising that she was going as the mistress of her host. She became furious when she realised what Greville had planned for her.

After several months of waiting, Emma came to understand that Greville would not be joining her and, eventually, began an affair with Sir William, then in his fifties and more than twice her age. They were married on 6 September 1791; she was twenty-six and he was sixty. The wedding gave her the title Lady Hamilton which she would use for the rest of her life.

As wife of the British Envoy, Emma welcomed Nelson in 1793, when he came to gather reinforcements against the French.Nelson returned to Naples five years later, on 22 September 1798. Nelson’s adventures had prematurely aged him: he had lost an arm and most of his teeth, and was afflicted by coughing spells. Emma reportedly flung herself upon him in admiration, calling out, “Oh God, is it possible?”, as she fainted against him. Nelson wrote effusively of Emma to his increasingly estranged wife, Fanny, Lady Nelson.Emma nursed Nelson under her husband’s roof, and arranged a party with 1,800 guests to celebrate his 40th birthday. They soon fell in love and their affair seems to have been tolerated, and perhaps even encouraged, by the elderly Sir William, whose own health was now failing and who longed for retirement. Hamilton showed nothing but admiration and respect for Nelson, and vice versa. Emma Hamilton and Horatio Nelson were by now the two most famous Britons in the world. They were not only in love with each other, but admired each other to the point of adulation.

Emma gave birth to Nelson’s daughter Horatia, on 29 January 1801[7] at Sir William’s rented home in Clarges Street, 23 Piccadilly, London. By the autumn of the same year, Nelson bought Merton Place, a small ramshackle house on the outskirts of modern-day Wimbledon. There he lived openly with Emma, Sir William, and Emma’s mother, in a ménage à trois that fascinated the public.[8] The newspapers reported on their every move, looking to Emma to set fashions in dress, home decoration and even dinner party menus but Emma’s great days were over. She had become fat, and Nelson did not like the social life she craved. She had turned down the offer from the Royal Opera in Madrid to sing for money. Now she and Nelson tried to create a new, quieter life.

Sir William died in 1803, and Nelson returned to sea soon after to fight in the Napoleonic Wars, leaving Emma pregnant with their second child. She was desperately lonely, preoccupied with attempting to turn Merton Place into the grand home Nelson desired, and frantic for his return. The child, a girl, died a few weeks after her birth in early 1804. Emma reportedly distracted herself by gambling, and spending lavishly. Now she was free to marry Nelson, if he could only obtain a divorce.

On 21 October 1805, Nelson’s fleet defeated a joint Franco-Spanish naval force at the Battle of Trafalgar. Nelson was seriously wounded during the battle and died three hours later. When the news of his death arrived in London, a messenger was sent to Merton Place to bring the news to Lady Hamilton. After Nelson’s death, Emma quickly exhausted the small pension Sir William had left her and fell deeply into debt. Nelson had willed his estate to his brother; he gave Merton Place to Emma, but she depleted her finances by trying to keep it up as a monument to him. In spite of Nelson’s status as a national hero, the instructions he left to the government to provide for Emma and Horatia were ignored. They showered honours on Nelson’s brother instead.

Emma spent a year in a virtual debtors’ prison, in the company of Horatia, before moving to France to try to escape her creditors. Turning to drinking, living in poverty in Calais, she died in January 1815, aged 49, of amoebic dysentery – an illness she probably contracted during her years in Naples. Sir William Hamilton had also suffered from amoebic dysentery.

Horatia never publicly acknowledged that she was the daughter of Emma Hamilton.

(This is an abridged version of her Wikipedia entry).

Letter from Lord Nelson to his mistress Emma Hamilton – DailyMail