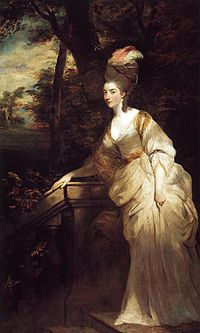 Her father, John Spencer, 1st Earl Spencer, was a great-grandson of John Churchill, 1st Duke of Marlborough. Her niece was Lady Caroline Lamb. She was the great-great-great-great-aunt of Diana, Princess of Wales.

She attained a large amount of fame in her lifetime. She became notorious for her marital arrangements, her catastrophic love affairs, and her love of gambling; she was famous for her beauty and her political campaigning; and she was a leader of fashionable style.

Lady Georgiana Spencer married the 5th Duke of Devonshire (then 25 years old) on her seventeenth birthday, 7 June 1774, at Wimbledon Parish Church. He was one of the period’s most eligible bachelors.

The Duchess of Devonshire was a celebrated beauty and socialite who gathered around her a large salon of literary and political figures. She was connected to key figures of the age such as the Prince of Wales and Marie Antoinette.

Her best friend Lady Elizabeth Foster, was the William’s mistress and after Georgiana’s death became his second wife.

Legacy
The Duchess was a frequent sitter in portraits, including a 1787 work by Thomas Gainsborough that was once thought lost. In 1786, Susanna Rowson, who went on to become a bestselling author, dedicated her first published work, Victoria, to the Duchess of Devonshire.

Film portrayals
The Divine Lady (1929), played by Evelyn Hall.
Berkeley Square (1933), played by Juliette Compton
The House in the Square (also titled “I’ll Never Forget You” (US) and “Man of Two Worlds”) (1951), played by Kathleen Byron
The Duchess (2008), played by Keira Knightley. The film, directed by Saul Dibb, is based on the biography Georgiana, Duchess of Devonshire by Amanda Foreman.

Works by Georgiana Cavendish
Emma; Or, The Unfortunate Attachment: A Sentimental Novel (1773)
The Sylph (1778)
Memorandums of the Face of the Country in Switzerland (1799)
The Passage of the Mountain of Saint Gothard (1803)