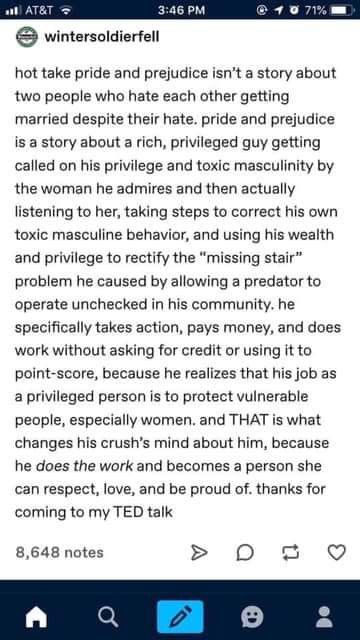 Source: wintersoldierfell on Tumblr
via CNJ JASNA on Pinterest
[text] hot take pride and prejudice isn’t a story about two people who hate each other getting married despite their hate. pride and prejudice is a story about a rich, privileged guy getting called on his privilege and toxic masculinity by the woman he admires and then actually listening to her, taking steps to correct his own toxic masculine behavior, and using his wealth and privilege to rectify the “missing stair” problem he caused by allowing a predator to operate unchecked in his community. he specifically takes action, pays money, and does work without asking for credit or using it to point-score, because he realizes that his job as a privileged person is to protect vulnerable people, especially women. and THAT is what changes his crush’s mind about him, because he does the work and becomes a person she can respect, love, and be proud of. thanks for coming to my TED talk