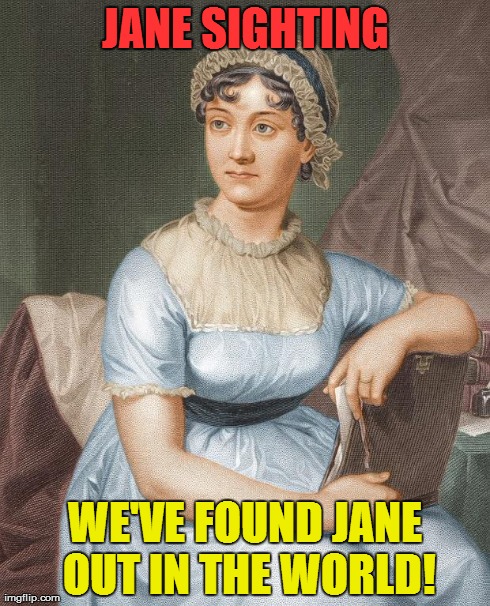 First up on July 8 there was another Jeopardy appearance! It was the Double Jeopardy Round in a category called Literary Clergymen and was the $400 answer:

In this Jane Austen novel, William Collins is a minister who has designs on Elizabeth Bennett

The first person to ring in got it correct!

Our second appearance was in a book I’m reading for school called Shakespeare’s Kitchen by Lore Seagal.

Here’s the set up, Ilka spends quite a bit of time with the Shakespeares and she kind of has a bit of a thing for Leslie Shakespeare, but it seems more of an admiration thing right now. She goes out to dinner with Nat who they kind of have this thing when he’s separated from his wife. They all work together (Nat, Leslie, and Ilka) and during a conversation with Leslie, Nat admits that he’s got a thing for Ilka. Leslie gets kind of possessive of her and it’s all kinda weird.

“Why  should he get huffy?” asked Ilka. “When Jane Austen describes Mr. Knightly, one of the things she tells about hims is that he is sensible.  Leslie is a sensible man.”

“And that turns you on,” said Nat. “The beauty of common sense escapes women with less imagination.”

I don’t know about you, but a sensible man, one like Mr. Knightly, would be really nice to have in my life.  I can be quite insensible so it would be a nice even balance.

Have you seen Jane out in the world? Send us your sightings at cnjjasna {at} gamail {dot} com