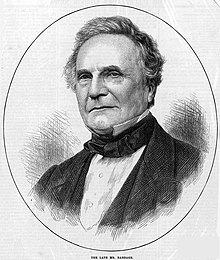 Charles Babbage, FRS (26 December 1791 – 18 October 1871) was an English polymath. A mathematician, philosopher, inventor and mechanical engineer, Babbage is best remembered for originating the concept of a programmable computer.

Considered a “father of the computer”, Babbage is credited with inventing the first mechanical computer that eventually led to more complex designs. His varied work in other fields has led him to be described as “pre-eminent” among the many polymaths of his century.

Parts of Babbage’s uncompleted mechanisms are on display in the London Science Museum. In 1991, a perfectly functioning difference engine was constructed from Babbage’s original plans. Built to tolerances achievable in the 19th century, the success of the finished engine indicated that Babbage’s machine would have worked.

While doing the research for this post I had so many tabs open that it got to be a bit confusing. I really find this man fascinating. I’m going to focus mostly on the Regency years but I highly suggest you follow some of the links at the bottom of the page to get more information on Babbage.

1810: Babbage starts his schooling at Trinity College at Cambridge and is disappointed to learn that he knew more about advanced math than his teachers. Along with some friends he founded the Analytical Society.
1812: Babbage transferred Peterhouse, Cambridge where even though he was considered the best mathematician. It was also around this time that he got the idea for a adding machine that would reduce human error in calculations.
1814: He didn’t graduate with honors but received his degree with out having to take the requisite exam. That same year he married his wife, they would have eight children with only three of them living to adulthood.
1815-1819: Babbage spoke regularly but found it hard to find a job, this is believed to be due to his dissertation which was considered blasphemous.